Color Match If You Paint Over Tags 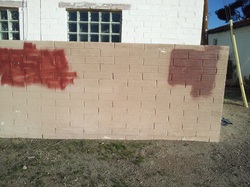 If you decide to paint over a tag, it is critical that you color match so that the repair is not as ugly as the tag was.  Suggestions for color matching the paint on commonly tagged items include:

Krylon brand:
There are several shades of blue recycle bins and between the followgin two colors you can get a fairly
close match, though we are still working on this.

Experimentation can be the expensive part of graffiti cleanup, in time, energy and money.  But once a good color match is found it's much easier, so please share with other neighborhood graffiti busters when you find good color matches and let us know.
Using sandpaper to remove graffiti - A nifty way to remove graffiti from sidewalks that is done with that thick textured material is to take a round disk sander pad and put a fairly rough grit of sandpaper on it (say 80 or 60 grit) and put that in a cordless drill and take that to the graffiti.  It will just rip it right off.  It won't work with thin paint but that gummy thick stuff comes right off.  In fact the older the tag the easier it is to remove.  It roughs up the sidewalk some but as soon as it rains that washes off.

A finer grit sandpaper will take that weird stuff off metal surfaces nicely so that when you paint over them the tag won't show through.  I also found that on the really old garbage cans that are that light green color for which I don't have a paint match lend themselves to the same treatment.  Using a finer sandpaper takes off a tag and doesn't do the can much harm.